Folk Songs and Finzi at The Bramall 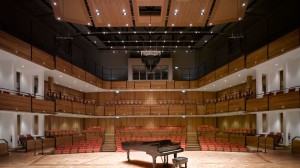 ‘When these buildings are complete, they will be the best of their kind in Europe and perhaps the world.’ Joseph Chamberlain, Birmingham University’s first Chancellor.

100 years after the opening of the original Aston Webb building, the iconic, red-brick heart of the University since 1909, the Bramall Music Building finally completes Joseph Chamberlain’s original architectural vision.

Providing the University’s outstanding Music Department with a permanent home at the heart of the University, with state-of-the-art teaching, research, performance and rehearsal facilities appropriate to its reputation, this £16 million facility benefits everyone involved in the University’s elite and inclusive music-making and performance as well as being open for use by our regional communities.

The 450-seat auditorium is the most flexible performance space at a UK university – suitable for performances from solo voice, early music, to a full symphony orchestra. When not used for music, it is a high profile location for drama and dance performance and for prestigious lectures.

More about the concert

Enjoy a summer’s afternoon of music with the City of Birmingham Choir who will be performing popular folk songs set to music by some of Britain’s best loved composers. The afternoon culminating in a rare performance of Gerald Finzi’s Requiem da Camera all in the elegant surroundings of the Elgar Concert Hall at Birmingham University.

The concert, on the 3rd July, also includes John Rutter’s The Sprig of Thyme, Six Studies in English Folk Song by Ralph Vaughan Williams, Harold Darke’s As the Leaves Fall, and the charming A Fancy of Folksongs by the popular London composer Cecilia McDowall.

‘We are hoping to take the audience on a musical journey through traditional folk songs arranged for chamber orchestra and choir,’ said Adrian Lucas, the choir’s musical director and conductor, ‘the finale being Finzi’s Requiem da Camera, composed after the First World War in memory of those who had fallen. This is an opportunity to hear a rarely performed piece of work, which, with its soaring melodies and magical a cappella choral writing is both beautiful and moving, and particularly apt as the 1st of July is the centenary of the Battle of the Somme.’