We will be starting our rehearsals again on Tuesday 9th September, if you are interested in coming along. You can read about our splendid new season of concerts for 2014-2015. We would love to see you there. 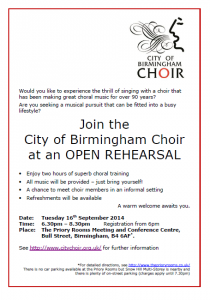 In particular, we would like to invite you to our OPEN REHEARSAL at 6.30 pm on Tuesday 16th September in central Birmingham, where you can take part in a rehearsal and see just what it’s like singing in the choir. Maybe that will inspire you to want to join the choir.

This entry was posted by Mark Lawrence on Thursday, 7th August 2014, and is filed under News.