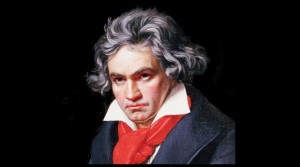 The Symphony No. 9 in D minor, Op. 125 (sometimes known simply as “the Choral”), is the final complete symphony of Ludwig van Beethoven (1770–1827). Completed in 1824, the symphony is one of the best-known works of the repertoire of classical music. Among critics, it is almost universally considered to be among Beethoven’s greatest works, and is considered by some to be the greatest piece of music ever written. (Wikipedia)

Beethoven’s heroic choral symphony, the Ninth, returns to symphony hall with the City of Birmingham Choir and our friends, Birmingham Choral Union, along with the acclaimed Royal Philharmonic Orchestra.

An unmissable all Beethoven programme featuring the monumental Choral symphony with its climactic Ode to Joy.

« Back to the calendar