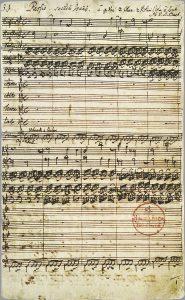 We will return to our favourite out-of-town venue, Tewkesbury Abbey, to present this masterpiece by Johann Sebastian Bach.

Our Musical Director, Adrian Lucas, writes:
‘The elegant sophistication of Bach’s music reached its peak in his two great settings of the passion – the story of Christ’s betrayal, imprisonment and crucifixion. While the St Matthew Passion is of truly massive scale in terms of resources and sheer length, the St John Passion is more modest in its conception, yet it contains some of the most beautiful and lyrical moments of his entire output.

‘First performed in 1724 in Leipzig, the narrative of the story is largely told by the Evangelist (tenor), Pilate (bass) and Jesus (bass) interspersed with solo arias and chorus movements which reflect upon the details as they unfold. Weaving another thread through the whole piece are the chorales – popular hymn tunes of the time which enable the audience or congregation to become involved with the dialogue.
‘I particularly look forward to conducting this piece, especially as it is a piece the City of Birmingham Choir has not performed for so many years. It has a perfect balance of drama, beauty, poignancy and lyricism and I know it will bring the story of the crucifixion alive for another year, especially at a time when such self-sacrifice is frequently lacking in our modern world.’

A masterpiece of music in the glorious setting of Tewkesbury Abbey.

Tickets are on sale online from Ticketsource via this website and will be available (until sold out) ‘on the door’ on the evening of the concert.

A City of Birmingham Choir promotion

« Back to the calendar