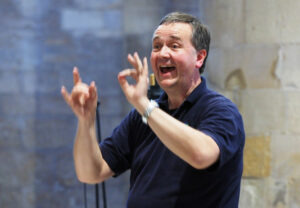 Adrian Lucas has been Musical Director of the City of Birmingham Choir since 2002, continuing a long and distinguished line which includes David Willcocks, Meredith Davies and Christopher Robinson. A former organ scholar at St John’s College Cambridge, he held posts at Portsmouth, Norwich and Salisbury cathedrals before moving to Worcester Cathedral in 1996. There, he was responsible for the introduction of girl choristers and the design and installation of the Kenneth Tickell quire organ in 2008, as well as continuing a vibrant programme of touring, broadcasting and recording as an organist and with the Cathedral Choir.

From 1996 to 2011, he was Artistic Director to the Worcester Three Choirs Festival, introducing a wide variety of new musical threads to the great tradition of this long-lived institution. These included commissioned works from Francis Pott, Andrew Gant, Jackson Hill and Cheryl Frances-Hoad; cross-over concerts including performances of music from the Sacred Concerts of Duke Ellington and late night events by the David Rees-Williams Trio, Respectable Groove and Acoustic Triangle, as well as the main choral events.

As a conductor, Adrian has an impressive list of works to his name, notably the choral works of Elgar, Vaughan Williams and Finzi; contemporary works by James MacMillan, John Tavener and Jonathan Dove; jazz-inspired music by Gershwin, Bernstein and Ibert; concertos with John Lill, Julian Lloyd-Webber and Emma Johnson; as well as many of the great symphonic works. He has made a number of visits to Medellin in Colombia where his work with disadvantaged children has been a source of inspiration.

As an organist, Adrian continues to give recitals both nationally and internationally. He has played in churches and concert halls from Sydney to Seattle and particularly enjoys broadening the instrument’s repertoire into the realms of jazz.

Adrian is also active as a composer, arranger and orchestrator, including choral works from short à capella carols and motets through to ‘Creation Canticles’, a work for solo soprano, chorus and orchestra. Alongside this are many arrangements for brass ensemble, and transcriptions of orchestral works, including scoring works for film and television.

Since leaving the cathedral world, he has been able to refocus his work on performance, working as a conductor, choral director and animateur, organist and continuo specialist as well as developing his own recording business, Acclaim Productions.

Adrian is Head of Choral Studies for the Royal School of Church Music (RSCM), as well as being the musical director of its Millennium Youth Choir. Adrian is a former Chairman of the British Music Society. He is a UK and international examiner for ABRSM and has been an external examiner for the Birmingham Conservatoire and the Royal Academy of Music.  He works regularly with the National Prep Schools Orchestra, as well as performing groups in Europe and the Americas.