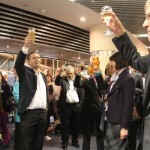 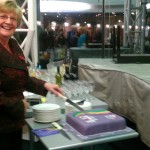 Afterwards, we had a late bar in Symphony Hall foyer where audience, friends and performers could relax and chat as part of the 90th birthday celebrations. Our President, Hugh Carslake, welcomed the Deputy Lord Mayor and Deputy Lady Mayoress (who cut the celebratory cake), as well as our other patron, former Conductor, Dr Christopher Robinson CBE CVO.

Christopher Robinson (Conductor 1964 – 2002) also participated in the pre-concert talk hosted by choir members Martin Willis and Stephen Shaw, and was joined in audio messages by Sir David Willcocks (Conductor 1950 – 57) and Adrian Lucas (Conductor 2002 – present). They discussed the history of the choir and the music for the concert. Our associate youth choir, as part of our Voice Factory programme, Bournville Young Singers, gave a brief performance at the end of the talk, pointing to the ways in which the choir aims to encourage choral singing into the future. 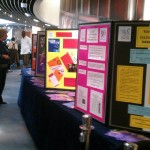 A fine exhibition, organised by Bob Casselden, was displayed in the foyer showing the history of the City of Birmingham Choir from its earliest days to the present. 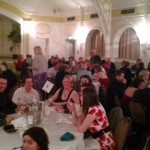 Members of the choir followed up this anniversary concert with an enjoyable 90th birthday dinner at Birmingham Botanical Gardens in January 2012.

You can find more about the history of the choir on this website.

Watch the Central News clip below, or read the review.

Read the interview with Adrian in the Birmingham Post