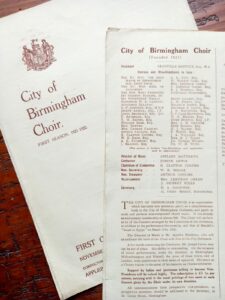 The start of the 1920’s was a milestone in Birmingham’s musical history when, in 1920 the City of Birmingham Orchestra (later the CBSO) gave their very first concert conducted by Sir Edward Elgar. Then, in 1921 the City of Birmingham Choir was formed to perform choral concerts with the orchestra as well as pursuing their own programme. 100 years later, both organisations are still going strong, despite having their centenaries disrupted by a global pandemic!

You can buy our centenary book – details, HERE.