Exhibition: From Sorrow into Joy

In March and April 2011, the Choir arranged an exhibition of paintings in Worcester Cathedral to coincide with a performance of Bach’s Mass in B Minor.

View the paintings in the Stations of the Cross exhibition at Worcester Cathedral.

Stations of the Cross

Stations of the Resurrection

An artist’s view on how the music, word and image relate. To complement the Choir’s performance of Bach’s great choral work I was delighted to be invited to exhibit my two series of paintings, The Stations of the Cross and The Stations of the Resurrection in the Dean‘s Chapel.  The paintings were completed in 2009 and have previously been exhibited in Malvern, Marlborough and at Buckfast Abbey.  In this current exhibition The Stations of the Cross are displayed during the final week of Lent and in Holy Week.  This  forms a dramatic and apt conclusion of the journey through sorrow to the cross on Good Friday.  After this,  twelve paintings on display in the Dean’s Chapel are the continuation of that journey drawn from accounts of the Resurrection appearances in the Gospels and the Acts of the Apostles.  A thirteenth painting  (Seek him – based on quotations from the Book of Amos and Psalm 139) is also displayed with the Resurrection paintings.

How do my paintings relate to Bach’s Mass in B Minor?

It seems to me that the Credo is the central point of the Christian statement of faith.  Three sections of the Mass, drawn from the Credo, form the fulcrum of Bach’s work and, in turn, are the key to the spirituality of the paintings.  These are almost at the focal point of the work, the Et Incarnatus est, the Crucifixus and the Et resurrexit.  The journey from the Incarnation to the Cross and the Resurrection is, for me, not only the meaning of the liturgy of the Mass itself but also a fundamental human and spiritual journey, which transcends time and place.  My paintings are an expression of this belief born out of a personal faith journey.  The Mass/Eucharist is the vehicle where this human truth is most profoundly enacted and made known to us.  In this sense I wanted my paintings to offer the onlooker a ‘way in’ or an ‘icon’ enabling them to be touched by this deep truth.  It seems to me that the themes of tenderness, grief and joy, which are encapsulated in Bach’s work, speak to what is of most value and meaning in the human psyche.  In this sense the expression of archetypal truths in word and music, and their depiction through image, can be bridged. 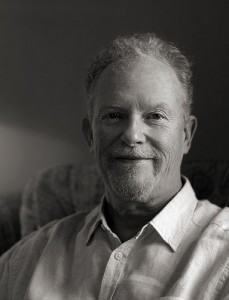 Nigel was formerly a printer, an Augustinian friar and teacher of Religious Studies and Music.  After leaving teaching he trained at the Westminster Pastoral Foundation in London and subsequently practiced for 30 years as a Jungian Psychotherapist and Counsellor in Birmingham, Droitwich Spa and Worcester.  Recently retired he now accompanies people on their life journeys as a Spiritual Director and leads study groups on prayer and spirituality.  He has been painting for about 25 years mostly for pleasure but has exhibited both here in Worcestershire and more recently in Wiltshire and Devon, and is a member of Christian Arts.  Most of his work is undertaken in acrylic on canvas, drawing mainly on symbolic and archetypal imagery.  The work in this current exhibition was completed since moving to Malvern in 2007 and reflects a growing interest in presenting Christian imagery that is both vibrant and meditative. Nigel was also a former member of the City of Birmingham Choir and now plays violin with the Chandos Symphony Orchestra.